Ether is Better… Than Bitcoin?

New York (CNN Business)Hunter S. Thompson once wrote, “There is nothing in the world more helpless and irresponsible and depraved than a man in the depths of an ether binge.” He was referring to the intoxicating drug, not the cryptocurrency. But ethereum investors may have reasons for fear and loathing, too.

The world’s second-most valuable cryptocurrency has soared even more than bitcoin (XBT) in 2021 thanks to non-fungible token mania and increased adoption of ethereum — ether, for short.
Ether prices are now hovering around $3,400, a more than 350% gain this year. Bitcoin prices have risen a “mere” 90% by way of comparison. In the past week alone, ether is up a staggering 30% while bitcoin is flat. That has raised some concerns that ether has risen too far, too fast, just like bitcoin did in 2017 before plunging spectacularly in 2018. 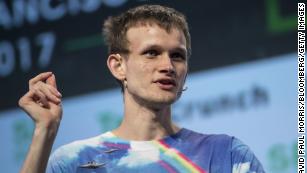 Ether is Better… Than Bitcoin?
Ethereum’s 27-year-old creator is now a billionaire
So why has ethereum, which now has a combined market value of almost $400 billion for all its coins in circulation, taken off lately?
Ether is the main currency of choice used to purchase non-fungible tokens, or NFTs, the digital assets that have become increasingly popular in the art and sports collectibles world.
“Why is there so much interest in ether right now? With the explosion of NFTs, people are viewing alternatives to bitcoin like ether as a real utility. It’s not just a store of value, the digital gold that bitcoin is,” said John Wu, president of Ava Labs, an ethereum-compatible blockchain firm.
Wu added that ether is also getting a boost thanks to two other more technical developments.
Coinbase, the giant crypto brokerage firm that recently went public, is now supporting transactions for Tether and USD Coin, two so-called stablecoins that are pegged to the dollar. Each of them are compatible with ethereum digital wallets.
Ether also just went through a hard fork — essentially an upgrade to the ethereum blockchain network that will help increase transaction speeds.
Ether is Better… Than Bitcoin?

But ether’s rise goes beyond technical reasons.
“There is a real, fundamental, and persistent demand shift happening right now,” said Jeff Dorman, chief investment officer at Arca, in a blog post this week.
He said that up until recently, new cryptocurrency investors only cared about bitcoin. Then they started to show interest in other cryptocurrencies, particularly ethereum, as a way to diversify their holdings. 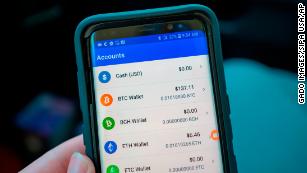 Here’s how to buy bitcoin without all the risk of buying bitcoin
“Ethereum has now crossed the Rubicon into the mainstream, and despite the difficulty understanding it, investors of all sorts are finding reasons to add ETH to their portfolios,” Dorman wrote.
S&P Dow Jones Indices has validated cryptocurrencies as well. The index provider behind the Dow and S&P 500, said Tuesday that it was launching a bitcoin index, ethereum index and cryptocurrency megacap index.
“Traditional financial markets and digital assets are no longer mutually exclusive markets,” said Peter Roffman, global head of innovation and strategy at S&P Dow Jones Indices, in a press release.
Investors may also be flocking to ethereum as well as other cryptocurrencies because there are rising concerns about inflation looming on the horizon as the global economy and US job market heats up.

Ether is part of the so-called decentralized finance, or DeFi revolution that offers financial products which don’t rely on central banks.
“With inflation rising, DeFi products on ethereum are the perfect way for people to combat the uncertainty created by central bank money printing and various supply shocks,” said Sergey Nazarov, co-founder of Chainlink, in an email to CNN Business.
All that said, investors probably need to be careful. Ether’s rise has been so sharp and sudden that one can’t help but expect an eventual pullback like Bitcoin had in 2018 after it first enjoyed a massive surge.
But Tally Greenberg, head of business development at Allnodes, a cryptocurrency hosting provider, said she’s not worried that ether will suffer the same fate.
“I’m not sure that ether will dip that much,” she said. “Yes, its price may fluctuate. But ethereum may have even more potential than bitcoin.”

Vitalik Buterin, a 27-year-old Russian-Canadian programmer, created ethereum in 2013 when he was 19. The cryptocurrency launched in 2015, and now Buterin holds about 333,500 ether in his public wallet. Multiply that by the $3,500 record high ether stood at on Tuesday, and you get more than $1.1 billion. Not bad.

Buterin co-founded Bitcoin Magazine, a publication that covers bitcoin and other cryptocurrencies, in 2012. In 2014, he was selected to be part of the Thiel Fellowship, a two-year program created by billionaire Peter Thiel that “gives $100,000 to young people who want to build new things instead of sitting in a classroom.”
He isn’t super active on social media — surprising for a guy with 1.4 million Twitter followers.
Ether prices have more than quadrupled in 2021, soaring 375%. The cryptocurrency is currently the second-largest digital currency by market value — a bit less than half the market capitalization of bitcoin. The total value of all ethereum in circulation is now about $403 billion according to CoinMarketCap. One ether was priced at $3,482 on Tuesday.
Although investors buy and sell thousands of different cryptocurrencies — including the Elon Musk tweet-fueled dogecoin — ether and bitcoin account for nearly two-thirds of the entire $2.3 trillion global crypto market.
Crypto enthusiasm skyrocketed in April as trading platform Coinbase went public at a valuation of $86 billion. Bitcoin surged to a record high, followed by a wild 500% rally in dogecoin, an asset that was created as a joke in 2013. Cryptocurrency backers have spent years insisting that ethereum, bitcoin and other digital coins could revolutionize the world of finance, and with the success of Coinbase’s Wall Street debut, those backers are finally having their moment.
Part of ethereum’s surge can be credited to the fact that it is the cryptocurrency of choice for purchasing many non-fungible tokens or NFTs — digital artwork and other collectibles that are transformed into one-of-a-kind, verifiable assets that are easy to trade on the blockchain.