Elon is a Megalomaniac Stop Listening to Him

Elon Musk Tweets Send Bitcoin Down 16% to $42K in Weekend Slide
The Tesla CEO clarified that the automaker has not sold any of its Bitcoin holdings, halting the cryptocurrency’s downward spiral. 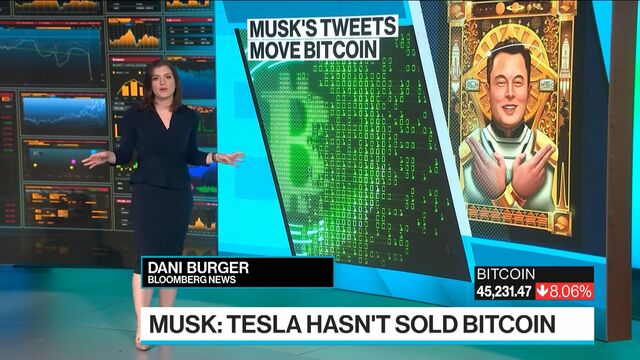 Musk Confirms Tesla Has Not Sold From Bitcoin Holdings

For a second week, the crypto market is being ruled by tweets from billionaire Elon Musk.

The Tesla Inc. chief sent Bitcoin rallying back above $45,000 on Monday after clarifying that the company hasn’t sold any holdings of the digital token. It’s the latest post to whipsaw prices across the industry and fuel speculation over just why the electric-car pioneer is issuing crypto missives on a daily basis on Twitter.

“He has to wake up to the reality that with his following, even single-worded tweets can move markets,” said Antoni Trenchev, managing partner and co-founder of Nexo in London, a crypto lender.

The drama started on Sunday after Musk sent a tweet that raised questions about whether Tesla might have already sold its stake. A user by the name of @CryptoWhale had speculated that Tesla had already sold its holdings, saying “With the amount of hate @elonmusk is getting, I wouldn’t blame him.” Musk responded to that tweet with a one-word post saying “Indeed.”

It was enough to shake the conviction of traders and Bitcoin sank 10% the weekend, hitting a fresh three-month low. Prices steadied on Monday, trading up 3% at $45,436 as of 11:12 a.m. in London.

Elon Musk Reopens an Old Wound in the Bitcoin Universe

Elon the Bitcoin Bully!!! Musk’s involvement in crypto has been a major driver of the bull market this year, and the Tesla’s disclosure of a $1.5 billion stake brought legitimacy to virtual currencies. In April, Tesla’s earnings report showed the company had sold 10% of its Bitcoin holdings. Musk said on Twitter that Tesla was trying “to prove liquidity of Bitcoin as an alternative to holding cash on the balance sheet.”

Traders and Tesla analysts have wondered aloud whether there’s anything serious behind Musk’s online musings. In the past two days, Musk has tweeted no fewer than eight times about crypto, often with emojis in response to jokes from his followers in between other posts about SpaceX and China’s mission to Mars. In response to another thread criticizing his Bitcoin stance, Musk said: “Obnoxious threads like this make me want to go all in on Doge.”

Elon the Bitcoin Bully!!! Musk appears to have been “taking on all comers on Twitter over the weekend and caused some chunky gyrations across the coins,” Chris Weston, head of research at Pepperstone Group Ltd., wrote in a note.

“The actions of Elon Musk have certainly discredited him to a certain extent with both some traditional and digital asset investors,” said Vladimir Vishnevskiy, co-founder of St. Gotthard Fund Management, which invests in crypto as well as conventional assets. “He once again proved his erratic nature.”

Elon the Bitcoin Bully!!!
Musk has stated that Tesla “has not sold any Bitcoin”.
The price of Bitcoin dropped to lows of $42,024 on Monday morning, continuing its downward trend from last week and marking a fall of 16% from its Saturday high of $50,615.

Although Bitcoin has since recovered to its current value of just under $45,000, it marks a continuing slide in the cryptocurrency’s price following Tesla CEO Elon Musk’s announcement that the carmaker would stop accepting Bitcoin as payment.

Bid at the Decrypt x Reuters NFT Auction
Decrypt is holding an NFT auction with Reuters to shine a light on the important work of crisis photographers. They work tirelessly to document humanity. The proceeds go directly to the freelance photographers to fund their projects. Bid now.

Tesla’s move was prompted by concerns over the cryptocurrency’s environmental impact, Musk explained. “We are concerned about rapidly increasing use of fossil fuels for Bitcoin mining and transactions, especially coal, which has the worst emissions of any fuel,” the Tesla CEO said in a tweet last week.

Over the weekend, crypto prices continued to tumble after Musk responded to a suggestion that “Bitcoiners are going to slap themselves next quarter when they find out Tesla dumped the rest of their #Bitcoin holdings,” with the single word, “Indeed.” Musk later noted in a tweet that “to clarify speculation, Tesla has not sold any Bitcoin.”

Bitcoin struggles with Musk’s U-turn
On May 12, before Musk’s announcement that Tesla would stop accepting Bitcoin, the cryptocurrency’s price was as high as $57,700.

Since then, however, it has steadily decreased. According to CoinGecko, Bitcoin is down 8% in just the last 24 hours. In the last week, Bitcoin has fallen by 22%.

Elon the Bitcoin Bully!!!
The downward trend is the latest in a long line of examples where Elon Musk’s tweets have moved the Bitcoin market.

Three months prior to his U-turn, Musk appeared to be all-in on Bitcoin, overseeing Tesla’s whopping $1.5 billion investment in the flagship cryptocurrency on February 8, 2021.

Bitcoin is Rallying, Again Just in case you hadn’t heard, or are annoyed that folks aren’t writing about it: Bitcoin is rallying, up around 16% in the last week to a value of a little […]

Facebook looks to be jumping on the blockchain wagon with plans to introduce its own stablecoin, according to a report from Bloomberg. The social network company — under fire for a seemingly constant stream of privacy […]