One of the biggest problems for the mainstream adoption of crypto is the need for memorizing seed phrases, the inability to get your cryptocurrency back if something goes wrong, the list goes on. Until major issue like this is solved, crypto is going to remain a pretty elite game. 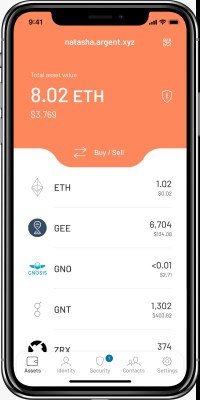 Argent is a project which recently won the prestigious inaugural user experience prize at Devcon4 by addressing many of these issues.

It’s a crypto wallet that lets you also port your ID around (much like a Google or Facebook Login) and solves the UX problem through clever smart contract architecture.. So you have a good old-fashioned and familiar Web 2.0 / centralized experience in a decentralized environment.

Argent has now raised a $4 million seed round from some of Europe’s leading investors, including Index Ventures, Creandum,  firstminute, Hummingbird and Atomico Partner Mattias Ljungman.

As a native app on the Apple App and Google Play Stores, describes itself as the first smart wallet. The presentation and security is that of a modern banking apps, but Argent doesn’t hold or access a user’s funds. The smart wallet also provides access to decentralized applications, with the user staying in control of their data, identity and assets.

Argent CEO and co-founder, Itamar Lesuisse, commented: “The web is dominated by monopolies and middlemen. Cambridge Analytica and Equifax highlighted the damage this was doing to people. The emerging decentralized web offers a better way – with people controlling their data, assets, and identity. But it is still way too hard for most people to use, so adoption is slow. We founded Argent to fix this”.

Dr. Julien Niset, Chief Science Officer and co-founder, Argent, says, “The challenge we set ourselves was to offer the usability and security of great banking apps, but without the bank. We wanted the user, not us, to be in control. We’ve achieved this by building Argent on smart contracts, code embedded in the blockchain that cannot be tampered with. Our smart contracts let users, for the first time, recover their wallets without a paper backup, set daily transaction limits and block fraudulent transactions. This makes Argent safer and easier to use than other wallets”.

Consumers can use the smart wallet to access decentralized applications and no technical knowledge is required. To generate more adoption, Argent plans to make a developer kit available to third parties. It already has an integrated exchange and Argent says it is currently exploring more partnerships in finance, as well as gaming.

Bjarke Staun-Olsen, Creandum, says, “Having backed Itamar and Gerald’s previous startup, Peak, which successfully exited in 2016, we knew how strong their ability to execute in consumer mobile was. And as they were combining with Julien’s expertise in cryptography, we knew this was the right team to drive consumer adoption at scale”.

Ari Helgason, Index Ventures, says, “Argent has developed a critical piece of infrastructure that paves the way for mainstream adoption of blockchain applications. The team’s technology breakthrough allows users to overcome the tradeoff between security and ease of use that has characterized wallets until now.”

Jon Russell@jonrussell    Last year, $7 billion followed into ICOs. Combined with 2018, the cryptocurrency-based funding mechanism is estimated to account for $20 billion. ICOs threatened to disrupt venture capital more widely across the […]